The relationship between Switzerland and the European Union is complicated. To me, the biggest problem is the lack of democratic legitimacy of European regulation when compared to Swiss laws. Switzerland has a wide range of ways for the public to participate in the creation of new laws and regulations. These include meaningful public consultations, frequent votes, and the possibility to launch referenda, either with completely new ideas or to force the government to have a public vote on a topic of interest. In contrast, the European Union does not offer its citizens any means of direct democratic participation besides the toothless "citizens initiative" that is generally treated with great disdain by the commission. I find the lack of democracy in the European Union problematic and therefore financed a survey to find out whether others share my concerns. And indeed they do!

The UK Jurisdiction Taskforce has issued a statement on cryptoassets and smart contracts. The statement clarifies that one can legally ‘own’ cryptoassets such as Bitcoin and that Smart Contracts can be legally binding, which is good news.

Swiss magazine Bilanz selected 100 digital shapers, i.e. people that they think are shaping the digital future of Switzerland. And one of them is me.

I am extremely honored to be listed as a co-author of the legal article Aktien-Token (share tokens) along with H.C. von der Crone and Martin Monsch. The article was published in the latest issue of GesKR, the most renowned Swiss journal for corporate and capital market law. Professor von der Crone is well-known for his authorship of Wertpapierrecht (securities law), the reference publication for Swiss securities law.

Meisser Economics has bought a few crypto francs in November. While I believe that stable coins will be an important future pillar of the blockchain economy, the crypto franc is not very useful yet. In particular, it would be desirable for it to be tradable by smart contracts. That means that smart contracts should not only be able to send crypto francs around, but also to buy and sell them when necessary. Thus, we need a smart contract that acts as a market maker. Uniswap provides such smart contracts out of the box, using constant product market making. Market making is one of the research areas of my phd, so I’d like to test it out myself by providing some liquidity on Uniswap and see what happens. However, before doing so, I wanted to quickly assess whether this is legal to do. In finance, one never can be sure about whether the most basic activity requires a license as the regulation is extremely dense. 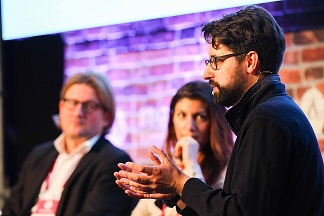 Every now and then, I get invited to speak at a conference. This year’s highlight so far was the Start Summit in St.Gallen, where I had a nice panel discussion with Daniel Gasteiger from valid Valid and Mona El Isa from Melonport, both blockchain startups. These are interesting times with a lot going on. Will Switzerland keep its competitive edge in the crypto space?

In Switzerland, the capital gains of private citizens are not taxed. Instead, there is a moderate wealth tax. I always suspected that this is the preferrable system in comparison to that of other countries that do the opposite. The main reason is a systemic one: with a capital gains tax, those who use their capital most productively, most notably successful entrepreneurs, pay the highest taxes. With a wealth tax, much more tax revenue comes from lazy rich who sit on idle capital without knowing what to do with. The result is a situation in which capital is better allocated and the economy grows faster. Maybe that is one of Switzerland’s success secrets?

My article The Code is the Model has been published in the latest issue of the Journal of Microsimulation. In it, I argue that non-trivial computational models are best specified by their source code. This bold claim has prompted two critical replies, one by the editor Matteo Richiardi and one by computer scientist Dan Tang. But most importantly, Matteo has taken the opportunity to adjust the submission policy of the Journal of Microsimulation. In future, authors will be asked to submit source code and executables along with their papers. This is a big step forward, and I hope that more editors will follow Matteo’s lead.

After having been published “online first” last summer, my 2015 paper An agent based simulation of the Stolper-Samuelson effect” has finally been formally published by Springer, on paper. This was somewhat faster than what John Cochrane experienced recently, but unlike him, I did not send my paper to a top tier journal (because it is not a top paper). Nonetheless, this confirms Cochrane’s point that journals should be seen as an archive of scientific research, and not the place to look for the latest ideas.

Finews is listing me in their who is who of Swiss crypto finance. Thanks!