Today, the top post of hacker news was an artificial intelligence steering a car in the computer game Grand Theft Auto V. This is a great illustration of the power of simulations: even if not entirely realistic, they can provide an excellent test environment - in this case for testing the Deep Drive self-driving car AI.

Today, Neue Zürcher Zeitung published my comment about the blockchain as an opportunity for Swiss finance. 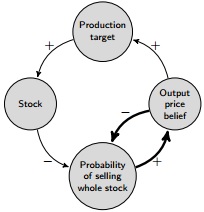 The paper “An Agent-Based Simulation of the Stolper-Samuelson effect” got accepted for publication in Computational Economics. Originally, this was a term paper Friedrich Kreuser and I wrote for the course Computational Economics and Finance by Karl Schmedders in spring 2014, and that I presented at CEF 2015.

The paper is about replicating a well-known phenomenon from classic economic theory, namely the Stolper-Samuelson effect, in an agent-based simulation. We succeeded at doing so with high accuracy thanks to the adoption of a few new algorithmic ideas. Interestingly, the agent-based simulation is much faster at finding the correct result than Mathematica or Matlab can solve the corresponding equation system from the classic theory.

Manual Stagars is creating a Swiss FinTech documentary and talked to me about the blockchain and opportunities for Switzerland. (28 minute video)

I presented my paper Seemingly Equivalent Firm Decision Heuristics (the slide deck) at the Computating in Economics and Finance Conference (CEF 2016), with some of the best-known computational economists in the audience, including Jean-Philippe Bouchaud, Herbert Dawid, Christopher Carroll, Matteo Richiardi and Blake LeBaron. Overall, the paper was well-received despite its limited scope (or maybe exactly because of it :) ).

Koninklijke Boskalis Westminster lets its shareholders choose whether they want to receive their yearly dividend in cash or in the form of newly created shares, creating a paradox in which everyone gets less by choosing more.

My master’s thesis in economics (pdf) touches many topics that I plan to research more deeply in the coming years.

Die Volkswirtschaft, a Swiss economics journal, interviewed me on the relationship between state and startups. The interview titled The State Shouldn't Stay in the Way was published in German as well as in French on 2015-10-26.